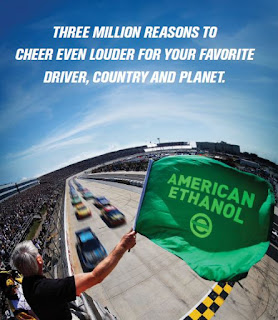 Three million reasons to cheer even louder for your favorite driver, country and planet.

NASCAR drivers have raced 3 million miles on Sunoco Green E15 ethanol, which has generated an increase in horsepower while reducing emissions by 20%

NASCAR has taken great strides to create positive impacts on its sport, our country and our environment. 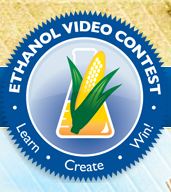 New Holland is sponsoring a video contest for FFA members in the US between the ages of 14 and 23!

Entrants are to research, film and edit a 60 to 90 second video about the why ethanol is important to their community, the American Farmer, our country, and the economy.

The the selected entrant's  FFA chapter will win $5000.

Entries must be submitted on or before December 17, 2012.

After careful review, the US Environmental Protection Agency (EPA) announced Friday that they have denied the requests by several state governors to waive the provisions of the Renewable Fuels Standard (RFS).

The governors had argued that the renewable fuels levels mandated by the RFS were causing "economic harm" to their states.

The EPA said that "Congressional requirements for a waiver have not been met and that waiving the RFS will have little, if any, impact.”"

Specifically, the EPA economic analysis found that "“waiving the mandate would only reduce corn prices by approximately one percent."

The EPA also said that economic analysis conducted by the US Department of Energy (DOE) showed  that waiving the mandate would not impact household energy costs.

The EPA made the correct decision. Use of corn for ethanol does not create economic harm. 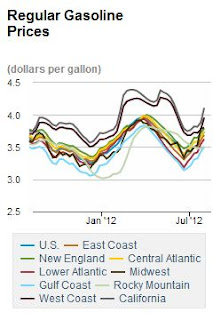 US Gasoline prices continue to climb this week.  The average prices of regular unleaded gasoline is $3.721.

With aging US refineries, including this one in Richmond, California  damaged by fire, the US needs to continue diversifying its energy sources.

Source: US Department of Energy

A new ad out today helps to spread the value of ethanol:

Senator Chuck Grassley (IA) responded to a WSJ opinion piece, The Ethanol Mandate is Worse Than the Drought, by the President and CEO of Smithfield Foods, Larry Pope, that blamed ethanol for higher corn prices.

The President and CEO of Smithfield Foods, Larry Pope, took to the opinion pages of the Wall Street Journal again to blame all that ails him on the Renewable Fuels Standard.

Some may recall that he did the same thing back in April of 2010 when commodity prices were rising. At that time, he perpetuated a smear campaign and blamed ethanol in an attempt to deflect blame for rising food prices while boosting Smithfield’s profits. And now he’s at it again.

I may start referring to Mr. Pope as Henny Penny from the children’s folk tale Chicken Little. Every time Smithfield has to pay a little more to America’s corn farmers to feed his hogs, Mr. Pope starts up with the same argument that the sky is falling and it’s all ethanol’s fault.

Mr. Pope’s opinion piece in the Wall Street Journal might lead some to believe that he’s very knowledgeable about the ethanol industry. But there are many areas where he’s not. He continues to perpetuate the myth that ethanol production consumes 40 percent of the U.S. corn crop. Mr. Pope states, “ethanol now consumes more corn than animal agriculture does.”

Everyone with a basic understanding of a livestock farm, a corn kernel or an ethanol plant knows that’s not true. According to USDA, 37 percent of the corn supply is used in producing ethanol. But the value of the corn does not simply vanish when ethanol is produced. One-third of the corn re-enters the market as a high value animal feed called dried distillers grains.

I would imagine that millions of hogs raised by Smithfield every year are fed a diet containing this ethanol co-product. Mr. Pope appears unaware of its existence. When the distillers’ grains are factored in, 43 percent of the corn supply is available for animal feed. Only 28 percent is used for ethanol.

This is the inconvenient truth for ethanol detractors. They prefer to live in a bubble where they believe that ethanol is diverting corn from livestock use. That’s just not the case.
Mr. Pope also proclaims, “Ironically, if the ethanol mandate did not exist, even this year’s drought-depleted corn crop would have been more than enough to meet the requirements for livestock feed and food production at decent prices.”

I’d like to ask Mr. Pope, why do you think that is? Why did farmers plant 96 million acres of corn this year? Why have seed producers spent millions to develop better yielding and drought resistant traits? The answer is simple: Ethanol.

If not for ethanol, farmers wouldn’t have planted 96 million acres of corn this year. Without ethanol, I doubt we’d have seen investment in higher yielding and more drought tolerant corn plants.

I’m sure Mr. Pope is an intelligent man. But he’s woefully uninformed on the issue of what the ethanol industry and the demand for corn has done for the size and genetic improvement of the corn crop.

It’s easy to understand Smithfield’s motive. They benefit from an abundant supply of corn, just not the competing demand for it. What is Smithfield’s primary problem? Again, the answer is simple: cost and profit. They still want to pay $2 for a bushel of corn.

This is an important point that I hope people understand. For nearly 30 years, until about 2005, companies like Smithfield had the luxury of buying corn below the cost of production. Corn prices remained at about $1.50 to $3.00 a bushel for nearly 30 years. Farmers routinely lost money.

The federal government then provided economic support for the farmers. Producers like Smithfield had the best of both worlds. They were able to buy corn below the cost of production, and let the federal government subsidize their business by guaranteeing a cheap supply of corn.

In the view corporate livestock producers, subsidies are just fine if they allow them to buy corn below the cost of production. Anybody could look like a genius with that business model.

Mr. Pope also continues to overstate the impact of corn prices on the consumer. Agriculture Secretary Vilsack recently stated that farmers receive about 14 cents of every dollar spent on food at the grocery store. Of that, about three cents is the value of the corn costs.

A research economist at the USDA recently stated that a 50-percent increase in the price of corn will raise the total grocery shopping bill by about one percent. To put it in perspective, the value of corn in a four-dollar box of corn flakes is about ten cents.

Mr. Pope also exaggerated the impact of ethanol on food prices in 2010, and he’s doing it again today. He’s using the devastating drought to once again undermine our nation’s food, feed and fuel producers. And he’s doing it to make more money.

A recent study by Professor Bruce Babcock at Iowa State University found that a complete waiver of the Renewable Fuels Standard might reduce corn prices by only 4.6 percent. The report states, “The desire by livestock groups to see additional flexibility in ethanol mandates may not result in as large a drop in feed costs as hoped.” And, “…the flexibility built into the Renewable Fuels Standard allowing obligated parties to carry over blending credits from previous years significantly lowers the economic impacts of a short crop, because it introduces flexibility into the mandate.”

The drought is enormous in both scale and severity. But we won’t know the true impact until September, when the harvest begins. The latest estimates from USDA indicate an average yield of 146 bushels per acre. That would result in a harvest of 13 billion bushels. This would still be one of the largest corn harvests.

I would suggest that those claiming the sky is falling withhold their call for waiving or repealing the Renewable Fuels Standard. It’s a premature action that will not produce the desired result. And it would increase our dependence on foreign oil and drive up prices at the pump for consumers.

Don't Let it Go to Your Head

A humorous new video released today highlighting the benefits and performance of E15 ethanol for the average American driver.  And with NASCAR goodness.

The Center for Agricultural and Rural Development (CARD) released on May 15 a study by economists at the University of Wisconsin and Iowa State University examining the impact  of increased ethanol consumption on wholesale gasoline prices. The study, authored by Professors Dermot Hayes and Xiaodong Du, is an update to a 2009 peer-reviewed paper published in the journal Energy Policy.


Key conclusions derived from the report include:

Source: The Center for Agriculture and Rural Development


Open to active high school and college students, the contest is seeking entries that highlights the benefits of the American-grown fuel.


READ MORE
Food and Fuel America.com http://www.foodandfuelamerica.comGood and Balanced Food and Fuel News!
at 10:37 AM No comments:

I Got You Ethanol

The Iowa Renewable Fuels Association (IRFA) recently held a video contest,“Fuel the Future”, that challenged Iowa high school students to create the best video highlighting the importance and benefits of renewable fuels—such as ethanol and biodiesel—to local communities, Iowa and the nation. The winner was Sam Ennis of Ames, Iowa.

The Iowa Renewable Fuels Association (IRFA) brings together Iowa ethanol and biodiesel producers to foster the development and growth of the state’s renewable fuels industry through education, promotion and infrastructure development. IRFA is committed to making Iowa a leader in producing renewable fuels and value-added co-products.

Earlier this month, the US Environmental Protection Agency (EPA) announced that it had approved the first application for registration of ethanol for use in making gasoline that contains up to 15% ethanol --- known as E15.

"For over 30 years ethanol has been blended into gasoline, but the law limited it to 10 percent by volume for use in gasoline-fueled vehicles. Registration of ethanol to make E15 is a significant step toward its production, sale, and use in model year 2001 and newer gasoline-fueled cars and light trucks.

To enable widespread use of E15, the Obama Administration has set a goal to help fueling station owners install 10,000 blender pumps over the next 5 years. In addition, both through the Recovery Act and the 2008 Farm Bill, the U.S. Department of Energy (DOE) and U.S. Department of Agriculture have provided grants, loans and loan guarantees to spur American ingenuity on the next generation of biofuels.

Today’s action follows an extensive technical review required by law. Registration is a prerequisite to introducing E15 into the marketplace. Before it can be sold, manufactures must first take additional measures to help ensure retail stations and other gasoline distributors understand and implement labeling rules and other E15-related requirements. EPA is not requiring the use or sale of E15.

Ethanol is considered a renewable fuel because it is generally produced from plant products or wastes and not from fossil fuels. Ethanol is blended with gasoline for use in most areas across the country. After extensive vehicle testing by DOE and other organizations, EPA issued two partial waivers raising the allowable ethanol volume to 15 percent for use in model year 2001 and newer cars and light trucks.

E15 is not permitted for use in motor vehicles built prior to 2001 model year and in off-road vehicles and equipment such as boats and lawn and garden equipment. Gas pumps dispensing E15 will be clearly labeled so consumers can make the right choice."