Critics of renewable American biofuels like ethanol know that killing off corn ethanol now with junk science and wild theories would end the drive for any future cellulosic ethanol---fuels made from a variety of plants and waste materials.
Without the infrastructure and investments in today's ethanol, there can never be tomorrow's ethanol.
So it's good to see the industry moving forward with technology that continues to drive lower the costs and inputs for ethanol production. Ethanol is good today and it will be even better tomorrow.

POET, a leader in the ethanol industry, announced today that a self-sustaining energy cycle for producing cellulosic ethanol is close to reality with the recent startup of an anaerobic digester at POET’s pilot plant in Scotland, South Dakota. 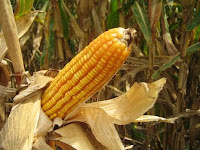 Corn cobs at Project LIBERTY will not only be used to produce ethanol; the liquid waste will go to an anaerobic digester to power the cellulosic plant and offset natural gas usage at the attached grain ethanol plant as well. That’s renewable energy created at the plant, powering the plant and powering the adjacent facility.
POET installed and fired up its anaerobic digester, which was designed and built by Biothane, on May 20. The digester uses liquid waste created in the process of converting corn cobs to ethanol. That waste is used to produce methane gas, which acts as roughly the equivalent of natural gas.

"This technology will cut fossil fuels out of our cellulosic ethanol production process and further improve the benefits of grain-based ethanol," POET CEO Jeff Broin said. "Over the long term, POET would like to eliminate the use of fossil fuels at all of our plants through a variety of alternative energy sources." The alternative energy technologies employed at other POET facilities include a solid waste fuel boiler, landfill gas and cogeneration.

The digester is in the research phase - corn cobs have never been used in this way before. The methane is currently being flared, but once the process is refined, it will be installed as part of Project LIBERTY.
Project LIBERTY is a 25 million gallon-per-year cellulosic ethanol plant, which will be built in Emmetsburg, Iowa. Research and development work is on schedule for the plant to begin production in 2011.
Source: POET
READ MORE
Follow Us --> Food and Fuel America on Twitter
Never Miss a New Article--> Subscribe to updates by Email
Find What You Seek --> Search FoodandFuelAmerica.com