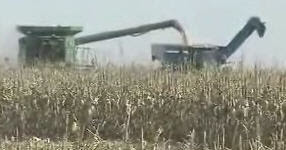 POET announced last week that its cellulosic ethanol pilot facility will be operational this year.

We previously wrote about the effort to harvest corn cobs for ethanol during last year's corn harvest.

"Our expanded research effort has led to several significant strides in the development of cellulosic ethanol technology at the lab scale in recent months," said Jeff Broin, CEO of POET. "Construction of this pilot facility will allow our company to take the next step toward the commercialization of cellulosic ethanol."

During the 2007 harvest, POET worked with major agricultural equipment manufacturers to harvest 4,000 acres of corn grain and cobs from a farmer’s field in Southeastern South Dakota. Cobs from this fall’s harvest and last will serve as the feedstock for the cellulosic pilot plant, along with corn fiber extracted from the adjacent corn ethanol production facility.

POET has been working on cellulosic ethanol technology for more than eight years and has significantly expanded their research and development efforts. The company recently completed an expansion of their research lab in Sioux Falls, S.D. that tripled its size.

Additional information on POET's ethanol efforts can be found on its blog, RhapsodyinGreen.