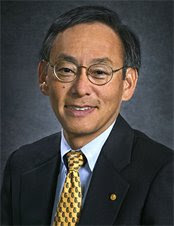 US Secretary of Energy Steven Chu gave support for all new automobiles to be able to use E85 ethanol-blended fuel.
Chu gave his support for E85 Flex Fuel Vehicles (FFV) during a trip to Des Moines on Monday:

“I’ve been told it costs about $100 in gaskets and fuel lines to turn a car so that it can go all the way to E85,” said Chu. “But a new car , it would only cost $100 out of $15,000. Wouldn’t it be nice to put in those fuel lines and gaskets so that we can use any ratio we wanted. It’s just a thought, I don’t think you’re going to get any objections in this audience.”

Moving our nation's vehicle fleet to Flex Fuel Vehicles is really a no-brainer. And it's always been a chicken or egg issue. To move the country from being held hostage to foreign oil, we need a transportation fuel that performs, fueling stations across the country and vehicles that can run on the fuel. And ethanol is the model that works, now.
Secrerary Chu also commented positively on the pending waiver for E15 that the EPA has under consideration:

“I don’t want to prejudge what they’re going to find, but if the existing automobile fleet can handle 15 percent, I would say let’s make that a target and go to 15 percent.”

While Chu was in Des Moines, the secretary announced more than $16 million in American Recovery and Reinvestment Act funding for energy efficiency and renewable energy projects in Iowa.
Speaking in a news conference with Governor Chet Culver:

“This funding will provide an important boost for state economies, help put Americans back to work, and move us toward energy independence,” said Secretary Chu. “It reflects our commitment to support innovative state and local strategies to promote energy efficiency and renewable energy while insisting that taxpayer dollars be spent responsibly.”