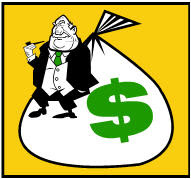 Big Lies are paying off for the Big Food companies.
Last year Big Food companies like Kraft Foods launched an all-out attack against biofuels. Through the Grocery Manufactures Association, the food industry leaders hired well-placed DC lobbyists and public relations firms to spew falsely that corn for ethanol was the major factor in food price increases.
And the major media just ate it all up: It must be ethanol that causes higher food prices.
We of course know the truth---corn for ethanol represents just a small part of most consumer food costs. Energy, packaging, marketing, transportation, labor and profits represent the major price components for consumer foods.
And a recent Congressional Budget Office study confirmed that ethanol production played only a small role in food price increases:

CBO estimates that from April 2007 to April 2008, the rise in the price of corn resulting from expanded pro-duction of ethanol contributed between 0.5 and 0.8 per-centage points of the 5.1 percent increase in food pricesmeasured by the consumer price index (CPI). Over the same period, certain other factors—for example, higherenergy costs—had a greater effect on food prices than didthe use of ethanol as a motor fuel

So who's profiting from the prices increases? Apparently, the owners of the Big Food companies.
Del Monte just announced that its Board of Directors approved a 25% increase in the quarterly dividend. And net revenue jumped last quarter for Kraft Foods based on higher prices. And the end of the second quarter will surely find more companies reaping the rewards of their higher supermarket prices and smaller packaging schemes.
So does anyone else even notice this "gouge and grab" by the Big Food companies? Maybe. It was enlightening to see the following story come across this week from MarketWatch:

The fact that the extreme volatility last year in the commodities markets has simmered down is another big plus for the food producers. Corn and fuel prices, despite recent rebounds, are still well below year-ago levels. This helps bulk up the bottom line.
At the same time, the best-run food companies have been getting away with judicious price hikes, correctly calculating that consumers -- perhaps especially in a recession -- will fork out a few extra pennies for their favorite comfort items.

So in these tough economic times, the Big Food companies are hoping you don't notice a few cents here or there or an ounce shaved off a box or bottole of your favorite food.
But the gig is up. Blaming ethanol for your higher profits is no way to run a company.
READ MORE
Follow Us --> Food and Fuel America on Twitter
Never Miss a New Article--> Subscribe to updates by Email
Find What You Seek --> Search FoodandFuelAmerica.com