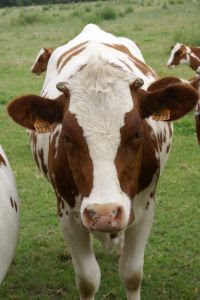 An interesting story that finally getting some press coverage is that recent low milk prices haven't shown full benefits to consumers.
The Milwaukee-Wisconsin Journal Sentinal reported yesterday about the collapse of milk prices and the slaughter of herds and dumping of milk:

But nine months after prices began tumbling on the farm, consumers aren't seeing the full benefits.
The average price for a gallon of milk at grocery stores nationwide last month was down just 19% from its peak of $3.83 in July. Farmers, on the other hand, got $1.04 a gallon in April - 35% less than they were paid last fall.

So what are milk producers doing about this?  In Europe, they're rioting and protesting the low prices.
And here in the US, they're thinning the herds.

The dairy industry response to these problems is to buyout cowherds through the Cooperatives Working Together (CWT) herd retirement program. CWT is a multi-dimensional, voluntary, producer-funded national program developed by the National Milk Producers Federation to balance supply and demand. Producers who have their bid selected must liquidate their entire herd and stay out of production for an entire year.  - High Plains Journal

This means there'll be less milk available in the future and thus higher prices.
Last time this cycle happened, the blame was shifted squarely on the price of ethanol and corn and ignored the demand/supply issue, including the herd culls.
Let's see how long before the first uninformed media story starts the wrong blame game again.
READ MORE
Never Miss a New Article--> Subscribe to updates by Email
Find What You Seek --> Search FoodandFuelAmerica.com
Follow Us --> Food and Fuel America on Twitter