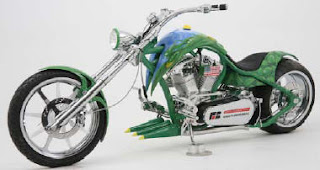 According to the Iowa Farm Bureau, Murphy commented on his winning “I haven’t won anything in my lifetime. I almost didn’t win this. It’s funny; I was just going to buy one ticket, but the young man who was helping me had trouble finding change, so I got another one. That ended up being the one that won”.

The Iowa Farm Bureau Renewable Energy Chopper was created by the talented “Orange County Chopper” stars, the Teutuls, and is their first to run on E-85. E-85 is 85% ethanol and 15% unleaded gasoline.

All of the proceeds, more than $113,000 from the chopper raffle, went to the American Lung Association of Iowa.

The Iowa Farm Bureau Renewable Energy Chopper and Iowa’s renewable energy industry will be featured October 11 and October 18 on the “American Chopper” show, which airs on the Learning Channel. The chopper engine will also be a prototype for Orange County Chopper’s future ‘green’ commercial chopper line.