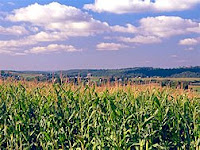 What's most interesting in yesterday's crop production report is what it doesn't say. There's no mention that ethanol demand will cause less wheat to be grown, less bread to go to the hungry, less barley for beer, and less soybeans for soy products.

That's because it's based on facts---not fears, lies and mistruths.

It looks like bumper crops all the way around. Corn will have the second-highest production with 12.3 billion bushels.

Of course, reality has little to do with Big Food's broken campaign against biofuels. Citing unsupported factoids all year long, the Big Food leaders have purposely sowed the seeds of doubt and mistrust over food production. Most of it just outright wrong - even with last year's crop reality.

Quite literally, facts don't seem to matter. The GMA leaders have willfully employed a "scorched earth" policy--- Use anything to advance their mission to destroy biofuels and advance profits.

F i rst, we must obliterate whatever intellectual justification might still exist for corn-based ethanol among policy elites. (Glover Park Group's Media Campaign )

Fortunately, those with cooler and wiser heads have seen through this rhetoric and continued the course.