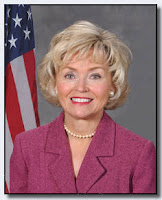 Indiana Lt. Governor Becky Skillman last week presented the Paul Dana Leadership in Biofuels Award to all of Indiana's corn and soybean farmers for their help in making the state a national leader in the biofuels industry.

The Paul Dana Leadership in Biofuels Award honors the memory of Indy Racing League (IRL) driver Paul Dana, a strong supporter of Indiana's growing biofuels industry who was killed in a racing accident in 2006. Dana was an advocate of biofuels and each year an individual or group is recognized in his honor for their work in the biofuels industry.

"Paul Dana was a hero to so many, as an IRL driver, a personality and an advocate for biofuels. He made a difference and was an inspiration," said Lt. Governor Skillman. "In a very short time Indiana has become a national leader in the biofuels industry. Today we recognize the state's corn and soybean farmers who have helped Indiana achieve such success."

"Indiana's corn and soybean famers have been valuable partners as we continue to expand our biofuels industry," said Lt. Governor Skillman. "We are committed to the production and use of biofuels because they burn cleaner, reduce the state’s dependence on foreign sources of energy and increase the economic opportunities for Hoosiers.

Since January 2005, Indiana has gone from one ethanol plant to seven operational ethanol plants and nearly a dozen proposed or under construction. The combined production of the plants currently operating and those under construction will exceed 1.1 billion gallons of ethanol annually and will use approximately 425 million bushels of corn. The state has also gone from zero to more than 100 public E85 pumps, making it third in the nation in public availability of E85.