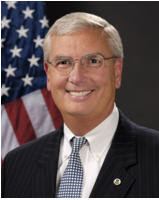 The US Environmental Protection Agency (EPA) today rejected the state of Texas' request for a waiver from the Renewable Fuel Standard (RFS).

EPA Administrator Stephen Johnson made the announcement at a press conference in the nation's capitol.

“After reviewing the facts, it was clear this request did not meet the criteria in the law,” said EPA Administrator Stephen L. Johnson. “The RFS remains an important tool in our ongoing efforts to reduce America’s greenhouse gas emissions and lessen our dependence on foreign oil, in aggressive yet practical ways.”

The decision comes as a major blow to opponents of renewable fuels and to Texas Governor Rick Perry who had made the request.

In addition, big food companies and leaders, like Lonnie "Bo" Pilgrim, had made sizable donations to fight renewable fuels and rollback the RFS. The Grocery Manufacturers Association and others reportedly spent millions of dollars to launch smear campaigns against the American-grown, renewable fuel.

However, support for the RFS and renewable fuels remain strong in Congress and across America. Senator Charles Grassley revealed the extent of the "smear campaign" against ethanol launched by Big Food companies. And many other governors came out in favor of renewable energy and the RFS.

The agency delayed its decision late last month in order to finish going through 15,000 comments it received.

But after careful consideration, the agency decided that the facts did not warrant such an extreme action as sought by Perry.