Renewable Fuels Are a Success for the U.S. 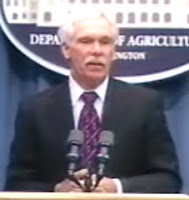 The USDA secretary, Ed Schafer, responded to the recent decision by the EPA to deny Texas' request for a waiver from the Renewable Fuel Standard (RFS).

Writing in a letter to the editors of the Wall Street Journal, the secretary shared his views that renewable fuels are a success:

"Renewable energy is a tremendous American success story. We are the world leader in biofuels. Since 2000, U.S. ethanol production has quadrupled. Biodiesel production soared from two million gallons to 450 million last year. Cellulosic ethanol, which will derive fuel from non-food feedstocks, is moving into production.

Last year biofuels trimmed U.S. greenhouse-gas emissions by more than 13 million tons and are already reducing U.S. gasoline prices by 20 cents to 35 cents per gallon. In fact, in 2007, consumers in Texas saved between $2.5 billion and $4.5 billion at the pump thanks to ethanol. Next generation technologies hold even greater potential to expand these multiple benefits to our country.

Yes, there are ripple effects, but the sharp rise in global grain prices in recent years is driven primarily by soaring energy costs, improved diets in rapidly developing nations, two years of bad weather in some countries, and new export restrictions in several nations. U.S. biofuels production contributed only an estimated 0.2%-0.6% to the 5.1% rise in U.S. consumer food costs.

Biofuels are just part of the story, and we are rising to the challenge."

Since the EPA announced its decision, harvest reports predict a record crop and corn price have fallen from highs pushed up earlier in the year by speculation.