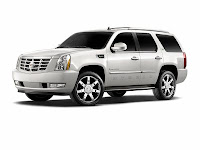 The rich will ride in green style with the new 2009 Cadillac Escalade Hybrid luxury vehicle.

General Motors also announced it will offer 18 flexible fuel vehicles (FFVs) in model year 2009. This is an increase from the past and marks the company's plan to having half their line at least E85 Flex Fuel capable by 2012.

According to a GM spokeman, the models cover the gamut from the four-cylinder Chevrolet HHR small crossover to the full-size Cadillac Escalade ESV luxury utility.

The 2009 model lineup includes the following flex-fuel capability at no additional charge to the customer:
Source: General Motors

Email ThisBlogThis!Share to TwitterShare to FacebookShare to Pinterest
Categories: FFV