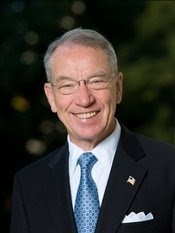 Senator Charles Grassley told reporters yesterday said that he had no choice in canceling a meeting between members of the Grocery Manufacturers Association (GMA) and himself after only one CEO agreed to attend and defend the actions of the trade association.

Grassley said the lack of interest by the GMA members was because they may be afraid to stand up for the policies of the Association or may not believe in the dirty tactics being used by the Association.

“I was hoping to have a good discussion about why each of these companies has decided to blame ethanol for raising their food prices. Instead, it appears that all they want to do is give a thumbs up to their trade association’s hiring of expensive PR firms to do their dirty work instead of entering into a real dialogue,” Grassley said. “I appreciate Mr. Policinski of Land O’Lakes’ willingness to sit down and talk, unfortunately it doesn’t appear that his counterparts at the rest of these companies were willing to defend what their trade association was doing.”

Grassley requested the meeting with 15 CEOs of companies that are prominent members of the Grocery Manufacturers Association. The Association’s President and CEO Cal Dooley had requested his own meeting with Grassley in a letter on June 6th.

Grassley has been the leading congressional voice for ethanol. He was the first to voice opposition to the smear campaign mounted by the Grocery Manufacturers Association.

“I’m sympathetic to people who are hurting, but to put the blame on ethanol and stop a biofuel just as it’s making traction in the market is not going to help the situation. In fact, if you take away ethanol, you're going to drive up the cost of energy and food even more,” Grassley said. “We’ve got events around the world having a much greater impact on the price of food and gas. We need to stop scape-goating ethanol and be intellectually honest about the real causes behind the increased food prices.”