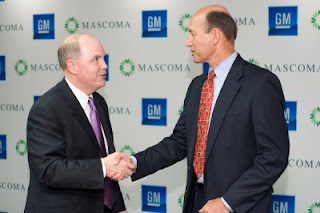 General Motors struck another deal this week to partner with an innovative ethanol company.

Just last January the automaker bought a stake in Coskata, which produces ethanol from biomass materials, agricultural waste and even garbage.

"These investments in leading-edge firms supports belief that ethanol has the greatest near-term potential as a clean-burning, renewable fuel that can help reduce oil dependence."

The American auto industry has been a tireless advocate of ethanol in recent years because the fuel performs and it is better for the environment than existing fossil fuels.

GM leads the auto industry in offering vehicles that can run on either ordinary gasoline or E85 - a blend of 85 percent ethanol and 15 percent gasoline - or any combination of the two. There are more than 7 million flex-fuel vehicles on U.S. roads, 3 million of which are GM cars and trucks.