Iowa Governor Chet Culver inspected the first Ethanol-powered patrol cars this week as they were unveiled in a ceremony on the capitol steps.

According to the governor, "There is no more recognized or greater symbol of the state of Iowa than the Highway Patrol, and now that symbol will be carrying ethanol." 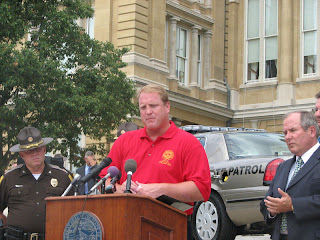 Besides keeping the state clean from crime, the new patrol cars are helping to keep Iowa environmentally clean too by using ethanol, a clean-burning, renewable-produced fuel.

According to Iowa state officials, 10 patrol cars are going into immediate service. Over 100 additional cars will join them next year.