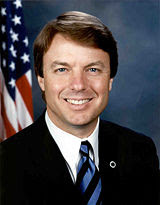 Although FoodandFuelAmerica.com does not endorse any candidate for any office, as we find interesting statements from candidates supporting or opposing renewable energy, we'll try to get something posted.*

Today US Presidential candidate John Edwards (D) released his plans for biofuels. Convenient that he was in Iowa!
Source: John Edwards for President

READ MORE
*just a reminder, we do not and will not support any candidate. Our goal is only to highlight public positions taken by candidates regarding renewable energy. Today is Edwards but we're sure more will follow.
at 9:16 PM