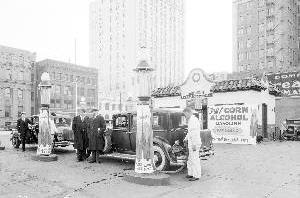 A replica of the nation’s first corn-ethanol blended gas station will be on display during the upcoming Nebraska State Fair, August 24 through September 3.

The exhibit was created based on a 1933 photograph of the Earl Coryell Co. filling station that was located in downtown Lincoln. The Coryell station was the first gas station in the U.S. to sell gasoline blended with corn alcohol which we now know as ethanol.