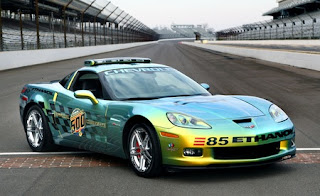 History will be made at the 2008 Indianapolis 500 when a customized Corvette Z06 E85 concept that runs on E85 ethanol fuel, a domestically produced alternative fuel similar to the E100 fuel that powers all of the race cars in the IndyCar Series, will be one of the official pace cars. It will be driven during the race’s pace lap by two-time Indianapolis 500 champion Emerson Fittipaldi.

“Although not a production FlexFuel vehicle, the Corvette Z06 E85 concept pace car is a high-performance example of Chevrolet’s gas-friendly to gas-free initiative, demonstrating viable fuel solutions,” said Ed Peper, Chevrolet general manager. “As an ethanol refiner in his native Brazil, Emerson Fittipaldi is the fitting Chevrolet champion to help support GM’s efforts with E85 and celebrate 30 years of the Corvette pacing the Indianapolis 500.”

The 92nd Indianapolis 500 takes place on Sunday, May 25, 2008. It will be the Corvette’s 10th appearance as the official pace car – a record unmatched by any other vehicle.

The Corvette Z06 E85 concept pace car is based on the production Z06 – already one of the fastest and most powerful cars on the market – and blends its performance with the high-octane, renewable alternative fuel that is derived from a variety of crops grown across the United States.

E85 is blend of 85 percent ethanol and 15 percent gasoline. Its benefits include reduced emissions of greenhouse gases and a reduced dependence on petroleum. GM is the leader in E85 production models, with more than 2.5 million E85-capable cars, trucks and SUVs on the road – with more on the way. Chevrolet offers seven E85-capable models in 2008.

“Most of the vehicles in Brazil are powered by ethanol produced from crops grown in the country, so I understand how a domestically produced renewable fuel can help the energy solutions of a nation,” Fittipaldi said. “And the E85-powered Z06 concept pace car proves economic and environmental consciousness can be fun and exhilarating. I can’t wait to get it on the racetrack.”

Fittipaldi, whose personal cars include a Corvette Z06 and a Camaro awarded after winning the 1993 Indianapolis 500, resides in both Florida and Brazil. He has interests in several Brazilian ethanol companies and is an ardent champion of ethanol as a viable alternative to gasoline.

Brazil – the fifth-largest country in the world – is a global leader in ethanol usage in automobiles. Approximately 70 percent of Brazilian new cars are equipped with FlexFuel systems that allow the use of a gasoline/ethanol mix or pure ethanol. Ethanol production has grown tremendously during the last three decades and has allowed the country to practically wean itself completely from imported oil.