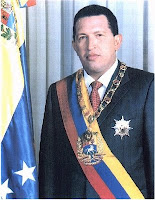 Apparently dignity has a price. And we've just lost ours at $140 a barrel oil.

New Hampshire has agreed to accept the charity of Venezuelan-strongman Hugo Chavez and receive free heating oil this winter. It had previously rejected the aid offer in prior years.

The oil-aid from the Venezuelan-owned oil company CITGO will be managed by Citizens Energy, a nonprofit organization started by former Massachusetts Rep. Joseph Kennedy.

But New Hampshire is not alone in accepting charity-relief from a hostile country. The state is actually the last in the American North East to accept this aid offer from the Latin American dictator.

As billions of dollars of our wealth are transferred to foreign countries as oil prices continue to climb, this latest news is but a harbinger of future indignities for our country.

It's a very sad sign that American is falling.