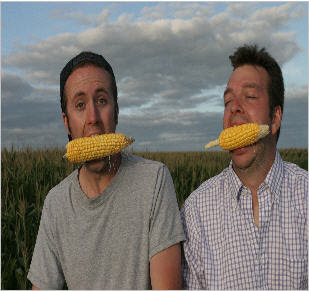 A fact of the movie business is that October rarely has any good movies playing at the local movie theater. The studios usually dump the bad ones out hoping that movie goers will forget all about them by the time the big holiday blockbusters are rolling out. This October seems to be the same.

So it was with some excitement that we got some popcorn and went to see the new movie King Corn. Yes. A movie about watching corn grow. Or at least about two big city guys who moved to Iowa for a year to grow corn on 1 acre of land. Oh, the excitement of it all.

Our take? They should have stayed home. But at least the popcorn was delicious.

Now we enjoy a good poke "at the man" as much as anyone else does. But this movie, which ironically was heavily subsidized by the Corporation for Public Broadcasting, seems to take great delight in portraying rural American farmers as welfare recipients who sit around with little to do between checks from Uncle Sam growing an evil seed that is responsible for all of the health problems in America.

Oh Please. America's farmers produce the most abundant supply of nutritious and affordable food for America and the world. Blaming obesity on farmers is just plain stupid. And this movie, filmed in 2004, looks quaint and out of date regarding subsidies given the increased demand for corn-based ethanol.

They wanted to be like Michael Moore. Don't think "Roger and Me". Think too long, too boring, too bad, rather like Ishtar.

Surprisingly, the bastion of liberal media, the New York Times, had little good to say about the film and its makers:

"But Mr. Cheney and Mr. Ellis are so pleasantly nondescript that they make no particular impression. As a result, all the time spent on autobiographical detail and personal banter hampers the film’s urgency, and plays like an awkward attempt to justify a format that the filmmakers are too self-effacing to exploit."

So with that, we give it two "ears" down for this clunky yawner of a documentary.

PS: The movie industry won't really have to worry about piracy with this one.

Isn't it amazing that farmers get blamed for producing an unhealthy product and at the same time ethanol gets blamed for starving people by making that product too expensive?