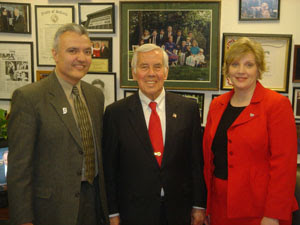 Senator Richard Lugar (R-IN) has named Carl and Lorrie Lisek "Energy Patriots" for their promotion of alternative fuels. The husband and wife team own an environmental consulting company and serve as the co-coordinators of South Shore Clean Cities Inc.

“We wanted to create a legacy for future generations through working with municipal governments, schools and environmental management systems,” said Carl. “With all the great things going on throughout the country, we felt we had an opportunity to really make a difference by promoting alternative fuels.”

“There are a lot of little things as consumers and businesses that we can do. We’re trying to highlight the little things - we want to be an educational tool to give people better information to make conscious decisions on how to improve the environment and lessen our dependence on foreign oil,” echoed Carl.

Carl and Lorrie also highlight the success stories in Northern Indiana and the progress towards energy independence of SSCC members. They are quick to point out that on October 13, 2005, when they hosted their first Clean Cities meeting, there were no E85 pumps in Indiana. Today, there are 96 pumps in the State, and Carl and Lorrie continue to promote ethanol and biodiesel at retail stations throughout Northern Indiana.

“It is an honor and privilege to work with Clean Cities. It has been a very rewarding opportunity, learning something new everyday,” said Carl. “We want Indiana to be a leader in the energy world. We’re excited about where we’ve come, and we’re excited about our future in Indiana.”