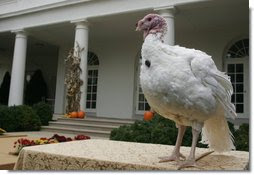 "May" and "Flower", two turkeys "pardoned" by President Bush on Tuesday in a ceremony at the White House, arrived in corn-fed style for the big event.

According to a story in the Detroit News, the turkeys arrived at the White House in a corn-fed, Flex Fuel Ford F-150 truck,

Ford touted the fact that the F-150 used was fueled with E85, a biofuel made of 85 percent ethanol.

"Corn is the turkeys' fuel and the truck's," Ojakli said. "Ford is pleased to provide the getaway vehicle in the turkey-cade." Ford supports the use of alternative renewable fuels like ethanol and has promised to make millions of vehicles that run on E85 as a way of reducing U.S. reliance on imported oil. When Congress returns from its two-week Thanksgiving recess in December, it is expected to take up an energy bill that increases the required fuel efficiency of vehicles by as much as 40 percent, or 35 miles per gallon.