Oh what two years and a change of politics brings.

Two years ago, lawmakers on both sides of the aisle in Congress were furious about the rising cost of gasoline, the impact upon consumers and sky-high oil company profits.

This week, pump prices again topped $3.00 and barely a whisper is heard from anyone. 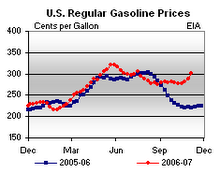 AP is reporting its findings to this legislative amnesia and indifference. They chalk it up to several factors:
What's closer to the truth is that the Democrats now control Congress. It's so much easier to blame someone else when you're not holding the gavel. Now that they are in charge of both the House and Senate, the leadership seems to have forgotten about the impact of higher oil costs. It must have just slipped their mind. Hmm.

But there's an oily trail from the oil fields tracked right on through both chambers and to both parties. OpenSecrets.org, created by the Center for Responsive Politics, is a good site for checking for "the rest of the story". 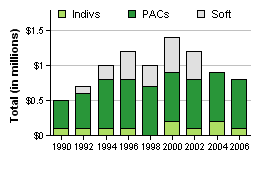 According to the OpenSecrets.org website, ExxonMobil has contributed more than $9.2 million dollars to campaigns since 1990.

And Chevron even beat that with over $9.4 million dollars in contributions.

This slick path sure helps when it's time to beat down any competition to oil.