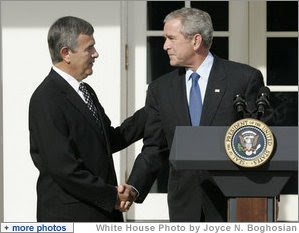 Johanns is resigning to run for Senate in his home state of Nebraska.

Prior to his tenure at the U.S. Department of Agriculture, Mr. Conner served on the National Economic Council beginning in November 2001 as a Special Assistant to the President for Agricultural Trade and Food Assistance, focusing primarily on Farm Bill issues. Previous to that, Conner served as head of the Corn Refiners Association as well as holding various staff positions with the Senate Committee on Agriculture, Nutrition, and Forestry.

This announcement should mean little change to the administration's support of renewable fuels like ethanol and its current Farm Bill proposals.