Corn Isn't What's Driving Up the Cost of Food 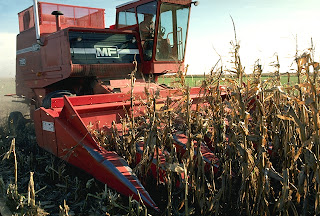 Letter to the Editor of the Des Moines Register, February 1, 2008:

Corn prices have little effect on the cost of food. Only 19 cents of every dollar spent on food goes back to the farm, and corn is just a fraction of that 19 cents.

More than 80 cents goes to labor, transportation, energy, etc. Americans who are upset about prices should point their fingers at the effect of a 29-percent increase in energy costs in 2007.

That gobbled up more of the family budget than the 4.8 percent rise in food prices - only slightly above the general inflation rate.

It wasn't so long ago that Brown was complaining about low U.S. corn prices undercutting peasant farmers in places like Mexico. Now he says that high prices will cut off exports, even though exports are headed for a new record this year. I also question the claim that high corn prices are hurting countries like Pakistan (which does not import any U.S. corn) and China (which has imported little or no U.S. corn for years).

It's because of misinformation like this that the Iowa Corn Promotion Board and the Iowa Corn Growers Association are launching a consumer-education campaign. We want to shatter the myths being peddled by Brown and others.

For example, at current corn prices, the corn to produce a gallon of milk contributes just 13 cents to the price. A blip in what we spend for the corn in our food is well worth what we get by using ethanol to cut our dependence on foreign oil.