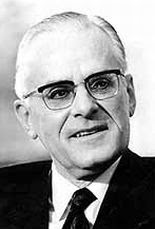 Dr. Earl L. Butz, former Secretary of the US Department of Agriculture, died Saturday. He was 98 and the oldest living former cabinet member.

Dr. Butz was secretary of the USDA during the Nixon and Ford administrations.

Dr. Butz was noted for his strong convictions to free American farmers from oppressive federal agricultural policy that limited production and he re-engineered many New Deal era farm support programs.

His advice to farmers was "get big or get out," and he encouraged farmers to plant crops like corn "from fence row to fence row."

In the 2007 movie, "King Corn", the two novice filmmakers visited Dr. Butz to share their views about corn. In one of the more memorable moments of the film, Dr. Butz showed that he could still tangle over farm policy. The filmmakers left licking their wounds. Maybe they'll learn not to pick on 97 year olds again!

After a lifetime of service, it's time to say goodbye to a friend of agriculture and America.