Kernels of Truth from Iowa 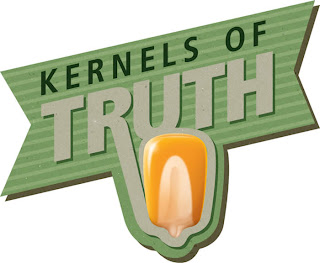 Corn Growers in Iowa, who have been on the front line of undue criticism towards their crop, have responded with a new effort to share the truth. Called Kernels of Truth, the program offers informative and useful facts in the Food vs Fuel debate. For example:

Just last year, the corn from one section about the size of a football field went into 3,291 hamburgers or 66, 713 bowls of corn flakes or 7, 608 pork chops, or even 464 gallons of E85 fuel. In addition to food and fuel, that crop went into paper, textiles, adhesives and more. Multiply those numbers by the nearly 14 million acres of corn produced in Iowa and we’re really talking about meeting demand!

Only 19 cents of your food dollar goes back to Iowa’s farmers. The remaining 80 cents is spent on packaging, energy, transportation, and marketing. Corn plays an important, but small role in the price you see in the checkout lane. The supply of corn going into the retail food industry has not changed in recent years, but rising energy costs have doubled along with world demand for products like milk and meat. In most food products on your grocery store shelves where corn is an ingredient, the corn actually contributes less than a penny to the cost.

Kernel of Truth: There is only 13 cents of corn in a gallon of milk. World demand for milk has increased and has bumped the price. Dairy cattle have the price advantage of using co-products from ethanol production called, Distillers Grains.

Kernel of Truth: Corn contributes only 18 cents to a ¼ hamburger and 31cents to an Iowa pork chop. In Iowa, livestock is still the number one market for our corn.

Kernel of Truth: Soda contains just 3.5 cents of corn based sweetener in a liter. High fructose corn syrup takes up only 7% of our total corn production. Though a major ingredient in soft drinks, it is used in small amounts in most other products.

Kernel of Truth: 11 cents worth of corn can be found in your morning cereal. Most of our corn crop is used to feed livestock or ethanol plants. For example, one bushel of corn produces thirty-eight 12 oz. boxes.

Kernel of Truth: Ethanol production in Iowa creates priceless clean air, new jobs, rural economic activity, and lower fuel costs. Not bad when you consider you are saving the environment, fueling the economy in Iowa, and keeping our fuel dollars in the U.S.