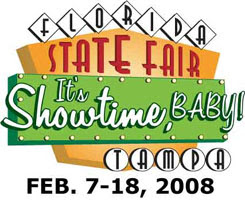 The Florida State Fair is going green! What better way for an agriculture venue to promote renewable fuels than to lead by example?

The Fair, which runs from February 7 through 18, 2008, will use only biodiesel products and is championing alternative fuels that will impact state farmers with an innovative exhibit during the upcoming fair.

The switch is a result of Florida Agriculture and Consumer Services Commissioner Charles H. Bronson’s plans to make Florida a leader in the production and usage of cleaner, renewable fuels. The fair will use biodiesel in all of its vehicles, generators and heavy equipment.

During the 2008 Florida State Fair, a “Farm to Fuel” Exhibit will explain how various alternative fuels are made and showcase five vehicles that run on alternative energy. The exhibit, which will be located in the Ag Hall of Fame building near gate 3, will show visitors how Florida is pursuing renewable fuel technology, including ethanol, biodiesel and other alternative fuels. The display will highlight renewable fuels that can be derived from agricultural waste from Florida grown crops and other biomass sources.

“These fuels are the energy of the future and it’s exciting to be able to show the public how far along Florida has come in putting the technologies into practice,” Bronson said. “I encourage people to stop by the exhibit and see firsthand the innovations that have become a reality and will impact our economy, environment and farmers.”

Bronson’s “Farm to Fuel” Initiative involves promoting the production and distribution of renewable energy using feed stocks from Florida farms, ranches and forests to reduce the nation’s dependence on foreign oil and provide farmers with an off season crop. He says this will help keep farms viable and prevent development of the land and further the “25 by 25” vision of farms producing 25% of the nation’s energy by the year 2025.

“In order to accomplish that goal we have to keep up the momentum,” Bronson said. “That’s why I have made available on the department website information about where consumers can locate ethanol and biodiesel fueling stations around Florida”.