Magellan Midstream Partners, L.P. and Buckeye Partners, L.P. recently announced they have begun a joint assessment to determine the feasibility of constructing a dedicated ethanol pipeline. The proposed ethanol pipeline system would safely and efficiently deliver renewable fuel ethanol from the Midwest to distribution terminals in the northeastern United States. 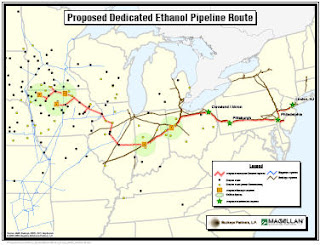 The proposed pipeline could have the capacity to supply more than 10 million gallons of ethanol per day, enough to meet the needs of millions of northeastern motorists who purchase 10% ethanol blended gasoline or higher ethanol blends such as E85.

The pipeline would gather ethanol from production facilities in Iowa, Illinois, Minnesota and South Dakota to serve terminals in major markets such as Pittsburgh, Philadelphia and the New York harbor. The project, which preliminarily has been estimated to cost in excess of $3 billion, would span approximately 1,700 miles and would take several years to complete.

“The most promising liquid fuel alternative to conventional gasoline today is ethanol. But without an efficient means to transport ethanol from the Midwest to other markets, its benefits are limited,” said Senator Tom Harkin (D-IA), Chairman of the Senate Committee on Agriculture, Nutrition and Forestry and a leader in promoting ethanol pipelines. “Having a dedicated ethanol pipeline running from the Midwest to the eastern markets will help bridge the gap between the Midwest and the East, aiding America’s energy security. So I applaud these two companies’ efforts and I look forward to working in Congress to support the development of such pipelines.”

Although there are many hurdles to overcome to make this ethanol pipeline project a reality, the two partnerships are hopeful that the obvious need for a pipeline to deliver ethanol from the Midwest to distribution terminals in the northeastern United States will lead to a viable and successful project.