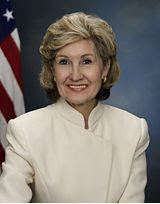 Texas Senator Kay Bailey Hutchison wants you to know who to blame for higher food prices: the American farmer.

Announcing Senate bill S. 3031, the senator and other anti-ethanol lobbyists blame all food cost increases on the price of corn:

“The ethanol mandate is clearly causing unintended consequences on food prices for American consumers,” said Sen. Hutchison. “Freezing the mandate is in the best interests of consumers, who cannot afford the increasing prices at the grocery store due to the mandate diverting corn from food to fuel.”

Really? Perhaps she hasn't read the report from Texas A&M which looked at this very issue:

"Relaxing the RFS does not result in significantly lower corn prices."

Because if she did, she might also learn that higher energy costs are the true culprit:

"The underlying force driving changes in the agricultural industry, along with the economy as a whole, is overall higher energy costs, evidenced by $100 per barrel oil."

Since the report was written just a month ago, oil prices have risen another $35 a barrel. And they are expected to increase even more.

These misguided efforts to decrease the fuel supply, increase our dependence on foreign oil and shift blame to American agriculture are unproductive. America needs to look at all efforts to get off oil.

The oil industry knows that crippling corn ethanol now will stop biofuel development. So expect to hear even more rhetoric from them and their supporters in the coming weeks.