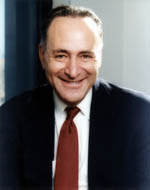 During a Congressional Joint Economic Committee hearing in Washington, DC, which focused on rising food prices, Congress learned that the rising cost of oil, increasing world-wide demand and weather are impacting food costs.

In his opening remarks, Schumer noted that even his family is impacted by soaring fuel costs and its impact during a recent grocery store visit:

From aisle to aisle, shelf to shelf, including everything from staples to special treats, the prices families are paying to fill their shopping carts have gone up – a lot. While we have been cringing at gas stations as gas prices have more than doubled since 2001, now it’s a double whammy. We pay more to drive to the supermarket, and then get hit with higher prices when we get there.

He also noted oil and energy's cost impact on food production:
During the hearing, USDA Chief Economist Glauber said that global markets have been a bigger factor in rising food prices than ethanol, and that food prices are expected to increase another 4-5 percent in 2008.

In his testimony, NFU's Tom Buis showed support for the biofuel industry.

"While many like to blame the increases on biofuels, specifically corn ethanol, a closer examination will reveal that other factors beyond ethanol have played a greater role in higher food prices," said Buis. " While there is no doubt that corn ethanol has increased demand for corn, and thus boosted prices for corn and some other commodities, it is not the biggest reason for the retail food price increases. The more significant reasons are $120 per barrel of oil, the declining value of the U.S. dollar, increased demand from developing economies around the world, and world-wide weather related production shortages, especially in wheat."

Oil's impact on inflation is well known. American motorists feel the pain every time they visit the gas pump. And renewable fuels like ethanol are adding to the fuel supply while bringing down fuel prices, cleaning the air, weaning our dependence upon foreign oil and building our domestic economy.

It's no wonder Big Oil wants to stop renewable fuels!