The Misery of High Cost of Oil

The rising cost of oil, nearly $100 a barrel, has greatly impacted American consumers in their wallets during the past year. And the food sector has been especially hit hard.

The rising cost of transporting food from fields to America's dinner tables has created hardship and misery for millions of Americans as they've seen their purchasing power diminished by rising oil costs. From milk and cheese to bread and beer, the higher cost of transportation fuel has impacted the American economy.

Recent inflation figures released by the government show the dramatic increase of transportation fuel costs this year. Energy costs increased 5.7 percent in November and have increased at an astonishing 33 percent annual rate in the past three months. Transportation costs rose 14.4 percent for the three months. 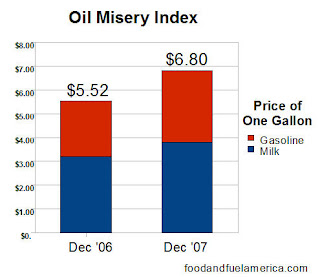 We'll be checking in on the OMI from time to time this year to track oil's high price of misery and hardship on American consumers.