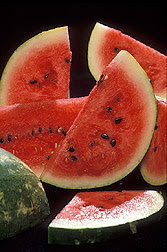 Can ethanol really be made from watermelons? Well, yes and it's not that fruity of an idea.

In this audio report (mp3) from the USDA, Bob Morrissey with the National Watermelon Association describes attending a recent bioenergy conference which showed a Ford F-150 that runs on ethanol made from watermelon.

Although the ethanol truck was merely a demonstration that ethanol can be made from alternative sources, the idea of "Melons to Ethanol" will spur initial test projects in several states, including Florida and Georgia.

If research proves successful then the project will branch out to several other states including Maryland, Delaware, North and South Carolina, Texas and California.