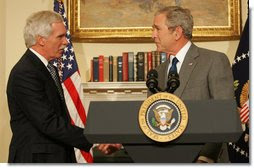 Gov. Schafer's nomination appearance is not expected to be controversial and he could be confirmed quickly by the full Senate.