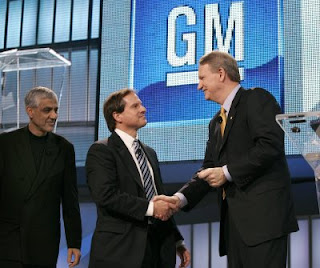 Can ethanol be made from renewables including trash and old tires? General Motors thinks so. And it is getting into the ethanol business in a big way.

GM announced a partnership with Coskata Inc. Sunday at the North American International Auto Show to use the company’s breakthrough technology that affordably and efficiently makes ethanol from practically any renewable source, including garbage, old tires and plant waste.

Coskata uses a proprietary process that leverages patented microorganisms and bioreactor designs to produce ethanol for less than $1 a gallon, about half of today’s cost of producing gasoline.

“We are very excited about what this breakthrough will mean to the viability of biofuels and, more importantly, to our ability to reduce dependence on petroleum,” GM Chairman and CEO Rick Wagoner said.

According to Argonne National Laboratory, which analyzed Coskata’s process, for every unit of energy used, it generates up to 7.7 times that amount of energy, and it reduces CO2 emissions by up to 84 percent compared with a well-to-wheel analysis of gasoline.

For GM, this could lead to joint efforts in markets such as China, where growing energy demand and a new energy research center could jumpstart a significant effort into ethanol made from biomass, Wagoner said.

GM has worked in partnerships with businesses, university and non-governmental organizations during the past two years to grow the U.S. infrastructure for E85, helping to open 300 fueling stations in 15 states. Helping make the fuel more readily available was the next logical step.

One of the criticisms of cellulosic ethanol is that its development is several years away. Coskata CEO and President Bill Roe said the next generation ethanol is here today.

“We will have our first commercial-scale plant making 50 to 100 million gallons of ethanol running in 2011, and that includes the two years it will take to build the plant,” Roe said.

The partnership includes an undisclosed equity stake for GM, joint research and development into emissions technology and investigation into making ethanol from GM facilities’ waste and non-recyclable vehicle parts.