And the Winners Are...

As the final votes are tallied from the Iowa Caucuses, the two winners, Senator Barrack Obama (D) and former Arkansas Governor Mike Huckabee (R), it's worth looking at their biofuels position again. Both clearly understand the importance of renewable fuels in the heartland. But as the campaigns now move to other areas of the country, it will be interesting to see if their public comments match their previous commitments to biofuels. And of course, the other major candidates still remain in contention for their party's nominations. 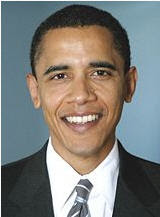 Two points from Obama's official website are interesting to note:

"Develop the Next Generation of Biofuels - Deploy Cellulosic Ethanol: Obama will invest federal resources, including tax incentives, cash prizes and government contracts into developing the most promising technologies with the goal of getting the first two billion gallons of cellulosic ethanol into the system by 2013.

Finally, Senator Obama recently appeared at an ethanol plant opening/tour in Iowa. Dr. Zeiger from the Fields to Fuel Institute has a video of his remarks made that day, available HERE.

We've found a few key points from former Arkansas governor Mike Huckabee. After a bit of site searching, a few points worth mentioning include support for energy independence, support for American agriculture and biofuel production. We especially liked the "we need more ethanol" statement.