A new report by the Congressional Research Service shows that the profits of the five major integrated oil companies remained high in 2007, as they generally accounted for approximately 75% of both revenues and net incomes.

Financial Performance of the Integrated Oil Companies, 2007
(millions of dollars) 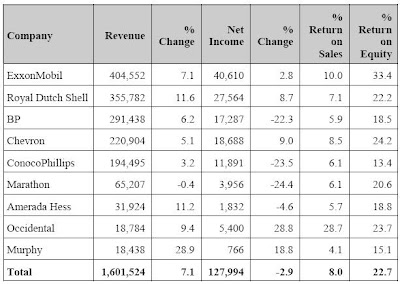 Revenue growth among the integrated oil companies in 2007 was driven by increases in the price of crude oil, especially in the last two quarters of the year. Even though five of the nine companies experienced a decline in oil production, and one of the nine experienced a decline in natural gas production, as shown in Table 2, their revenues increased on average by 7.1% in 2007. With output declining, it is likely that revenue growth was based on increasing prices.

Higher oil prices continue to plague the American and world economies. Billions of dollars--which could be spent for more food, healthcare, education and consumer goods--are leave the country with higher oil prices and higher profits.

And these higher costs are being passed on to consumers while oil companies continue to enjoy $18 billion in federal subsidies. Something to think about as we pay at the pump.