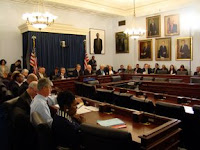 Testifying before the US Congress, Big Oil executives were criticized for taking generous tax subsidies and not developing alternative renewable fuels.

It didn't seem to faze the oil industry at all.

And this slippery evasion happened on the very day gas and diesel prices are at record high levels and thousands of truck drivers staged protests and strikes across the country.

Ed Markey, D-MA, chairman of the House Select Committee on Energy Independence and Global Warming said concerning the indifference from the oil industry:

"Americans are hoping that the top executives from the five largest oil companies will tell us that these soaring gas prices are just part of some elaborate hoax. Unfortunately, it's not a joke."

Executives from the major oil companies, including Shell, Chevron, ConocoPhillips and Exxon Mobil were grilled on their record of taking tax breaks and refusing to promote renewable fuels.

But even with industry profits of $123 billion, the oil industry remains indifferent to the economic impact of higher gas prices, the negative environmental impact of fossil fuels and need for energy security and energy independence.