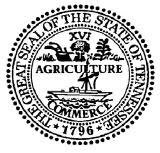 "25x'25" is a rallying cry for renewable energy and a goal for America – to get 25 percent of our energy from renewable resources like wind, solar, and biofuels by the year 2025.

"the development of a broad spectrum of renewable energy sources, including wind power, biodiesel, biomass, methane digesters, ethanol, and solar" for the direct economic benefit to agricultural landowners and rural communities.

The measure also recognizes the state's and region's "tremendous renewable energy resources" and that this resource base will "allow America's farmers and ranchers to play a major role in ensuring a fully sustainable U.S. energy system."

The full Tennessee resolution can be found HERE in PDF format.