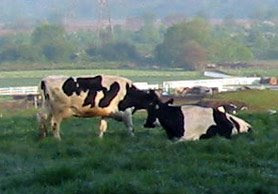 Dairy farmers in New Jersey will continue to receive additional payments to help them remain viable due to higher fuel costs, according to a decision issued by the New Jersey Department of Agriculture.

The Department reviewed the so-called ”fuel adjustment add-on,” which was first instituted in February 2007. That regulation mandates that purchasers of raw milk from New Jersey dairy farmers must pay the farmers an additional charge for fuel to help offset high diesel prices. The payment is calculated monthly by the Department and moves up or down based on whether the price of the fuel has risen or fallen. Farmers have received an average of $325 per month from the fuel adjustment add-on.

The decision was issued after a series of hearings starting in November 2007 and ending this February. The fuel adjustment add-on addresses the clear impact of escalating fuel prices on the producer, which is threatening the ability of remaining dairy farmers to stay in business.

A copy of the full decision document which was filed April 11 with the Secretary of State, is available on the web at www.nj.gov/agriculture/pdf/Dairydecision08.pdf.