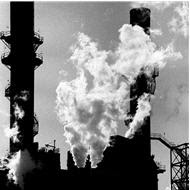 According to a recent report in the Chicago Tribune, global-warming pollution from oil refineries is expected to soar by as much as 40 percent during the next decade.

"While greenhouse gases from the tailpipes of cars get the most attention, the refineries that keep cars and trucks running also contribute to global warming. Fuel must be burned to make gasoline from oil, generating carbon-dioxide pollution." - Chicago Tribune, Feb, 2008

The report went on to discuss that the increases in greenhouse gases are the consequence of burning Canadian crude which requires more energy to process.