The Washington Post has an interesting editorial on the emerging food aid crisis that is worth reading.

America is a prosperous and generous country. And for many years, America has generously provided aid to developing countries around the world. But increased costs are straining the food aid budgets.

An April 2007 report by the Government Accountability Office showed that transportation and other overhead costs now consume 65 percent of U.S. food aid dollars. This is partly attributable to higher fuel prices and U.S. laws requiring that most grain shipments go out on relatively expensive U.S.-flagged cargo vessels.

And why does so much food have to travel the high seas in the first place?

Because U.S. law requires that the government buy all food donations from U.S. producers. 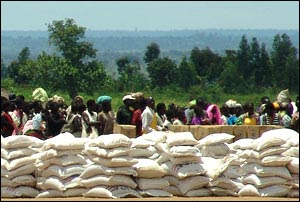 The editorial offered a starting proposal for easing the crisis:

One cost-cutting measure, supported by many economists and by relief organizations such as CARE, would be to permit the U.S. government to buy at least some of the grain it donates from farmers nearer to famine zones -- to buy, say, South African or Ethiopian wheat and ship it to the hungry elsewhere in Africa.

Both the European Union and Canada have recently authorized such "local and regional purchases," with broadly successful results.

President Bush has called for allowing as much as 25 percent of the U.S. food aid budget to be used this way.

Unfortunately, lawmakers have rejected these proposals. Higher fuel costs and higher transportation costs aren't going away anytime soon. So expect to see more crisis before an ultimate solution is found.