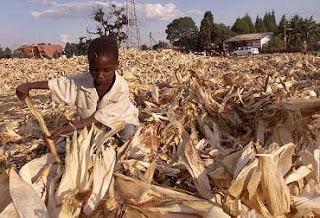 Catchy title, isn't it? But that was the sensational argument many critics of American farm policy made against market-driven lower corn prices just a few years ago. American corn farmers grew too much corn and sold it at too low market prices.

Corn prices are now so low that many farmers are now forced to sell their entire harvest, instead of saving some for their own consumption. Low prices for corn and other crops is spreading poverty to more than 70% of the rural population in some areas of rural Mexico.

One significant reason for the low prices: US farm and trade polices that lead to "dumping." The US spends roughly $10 billion annually supporting corn farmers. The country encourages farmers to grow significantly more than is needed. Corn is therefore exported, and sold at prices below the cost of growing it. This pushes down prices everywhere, and all farmers earn less for their labor. - OxFam America, 2004

So, we're surprised how the critics now complain that corn prices are too high and THAT's causing poverty around the world.

The world’s food situation is bleak, and shortsighted policies in the United States and other wealthy countries — which are diverting crops to environmentally dubious biofuels — bear much of the blame. - New York Times Editorial, March 2008

By putting pressure on global supplies of edible crops, the surge in ethanol production will translate into higher prices for both processed and staple foods around the world. - C. Ford Runge, ForeignAffairs.org, 2007

Feeding Cars and Starving the Poor
On March 29, 2007, Cuban leader Fidel Castro berated Bush’s economic initiatives for ethanol production in the Cuban Communist party newspaper Granma, stating that using corn, or any food source, to produce ethanol could result in the “premature death” of upwards of three billion people. He explained that the drive to produce corn-based ethanol would hike up food prices around the world, adversely effecting poverty in developing countries. - Council on Hemispheric Affairs, 2007

Seems to us that the critics of American farmers and biofuels are just that, professional critics. Without a cause and crisis to promote or a new book to sell, they're out of business.

Here's an interesting story: http://afp.google.com/article/ALeqM5hXGvyrbtOBD1_w-eVtjEo4cR0RUQ. It seems that Malawi is going to be able to grow enough corn to meet their own needs for the third year in a row. Maybe it's not all doom and gloom in Africa?