We've Got to Get Off Oil 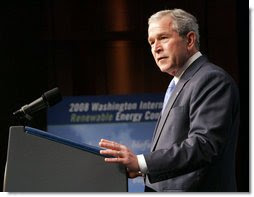 President Bush addressed attendees at the Washington International Renewable Energy Conference 2008 (WIREC) and his message was simple and direct:

"...America has got to change its habits. We've got to get off oil."

The president went on to explain some of the reasons why he believes this:

"...dependency on oil presents a real challenge to our economy. "

"The dependency upon oil also puts us at the mercy of terrorists. If there's tight supply and demand, all it requires is one terrorist disruption of oil and that price goes even higher. It's in our interests to end our dependency on oil because it -- that dependency presents a challenge to our national security. "

"...some countries we get oil from don't particularly like us. They don't like the form of government that we embrace. They don't believe in the same freedoms we believe in, and that's a problem from a national security perspective, for the United States and any other nation that values its economic sovereignty and national sovereignty.

The message that our dependence upon oil is a clear and present danger --- economic blackmail, terrorist disruptions, environmental disaster --- has been coming from politicians, environmentalists, businessmen and national security experts.