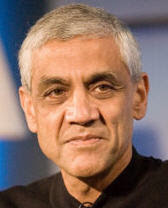 According to the WSJ's blog about the incident, Mr. Khosla stated:

“The API started issuing press releases about food. Suddenly they got interested in the welfare of poor Africans.”

“We have never said anything about ethanol being responsible for food prices,”

As evidenced in this study, the concerns over “fuel versus food” are valid and increased RF mandates would result in disproportionately large increases in U.S. food costs. - (Executive Summary, Study Conclusions, page 4)

An increase in the renewable fuels target above baseline levels will result in higher consumer food costs. (Impact on Consumer Food Costs, page 14)


Lest we be accused of just making this stuff up, Business Week also noted API's verocious attacks on ethanol, including the food and fuel issue with Big Oil's Big Stall on Ethanol: Keeping E85 Out of the Driver's Tank.

Among other things they noted the API is doing to limit ethanol, they've also inspired the food and fuel debate:

Funding an anti-ethanol information campaign.
"In June the API [American Petroleum Institute] released a study it commissioned from research firm Global Insight Inc. The conclusions are far from universally accepted, but they have been picked up and promoted by anti-ethanol groups like the Coalition for Balanced Food & Fuel Policy."

Business Week just may have summarized the oil industry's attitude towards renewable fuels:

"Big Oil is at the top of the list for blocking the spread of ethanol acceptance by consumers and the marketplace," says Loren Beard, senior manager for energy planning and policy at Chrysler, referring to the struggle to get E85 pumps installed.